Who knew that corporate earnings calls could be so interesting?  Disney CEO Bob Iger was full of information this week on what's to come for Disney+ as it relates to Marvel and Star Wars.  In a report from Variety, he provided updates on several release dates.  Let's take a look at all of them.

We begin with Marvel's The Falcon and the Winter Soldier, which has faced some production delays.  That, apparently, won't stop the series from premiering in August of 2020.  That is a slight move up from the original Fall 2020 debut.

The show that has been getting quite a bit of the talk on social media ever since that "Big Game" teaser is WandaVision.  We now know that Marvel's most interesting couple will be coming to Disney+ in December 0f 2020.  It had looked like we would have to wait until 2021 for this one, but a lead in to Doctor Strange in the Multiverse of Madness might have changed that.

Speaking of lead-ins, Loki now looks to be the first of the Disney+ Marvel series to debut in 2021.  This appears to also have Doctor Strange ripple effects, which we kind of already knew. 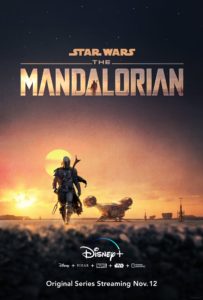 If all of that news wasn't enough, there was also good news about Season 2 of The Mandalorian.  It looks like Mando's adventure will continue in October of 2020.  As you can see from the Season 1 poster, that is a slight move up from when that season debuted in 2019.  The puts it closer to the Fall TV launch schedule for most networks, especially The CW.  This will be something to keep an eye on, as far as an exact date goes.

These will obviously be updated once exact dates are announced.  There are also other series with no premiere dates, and the possibility of two yet-to-be-announced Marvel series as well.  More on this as it develops.