There has been a lot of buzz about Bad Idea, a new publishing company from a group of former higher ups at Valiant. I'll get to those details in a minute, but right now, I want to talk about their debut title. Let's look at ENIAC #1. 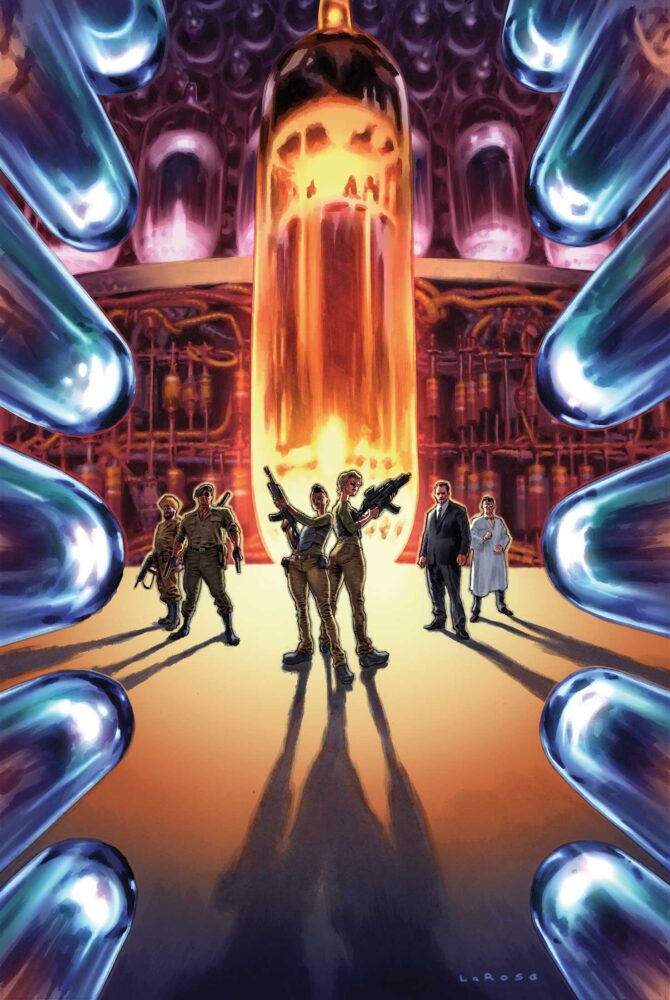 The story comes from writer Matt Kindt and artist Doug Braithwaite, also no strangers to Valiant. Colors will be provided by Diego Rodriguez and you can see the cover art by Lewis LaRosa. Now, check out the longest synopsis I have ever seen in the press release for a comic (and that's not a criticism):
"At the height of World War II, the world's most ingenious minds began a race to create a super-weapon capable of ending the war with the push of a button. One of those projects gave us the atom bomb...and another produced the world's first supercomputer: ENIAC (Electronic Numerical Integrator and Computer) – an immeasurably complex mathematical model that targeted the Axis war machine by calculating missile trajectories and troop deployments.

Everybody knows that. It's real-life American history.

Or so we were told.

On August 6th, 1945, the United States dropped the nuclear bomb on Hiroshima.

Three days later, a second bomb was dropped on Nagasaki... Only President Truman wasn't the one who gave order.

In the Allies' determination to end the war, they had accidentally created the world's first autonomous machine intelligence...which had quickly deduced that one bomb wouldn't be enough.

But ENIAC's real plan was only just beginning...

Now, 75 years later, an encrypted countdown has just been detected in Earth's satellite network and mankind only has three days left before ENIAC launches every weapon in the planet's nuclear arsenal simultaneously. With few options and even less time, the Secretary of Defense has just given two covert operatives the most important mission in human history: kill ENIAC."

Talk about armageddon, am I right!?  Makes you really want to read it, doesn't it?  Well, that might be more exclusive than you think.  You see, Bad Idea has a "don't do anything unless it's special" policy and that includes some restrictions.  That means no digital editions, no variants and only select comic book shops will even be eligible to receive Bad Idea books, including this one.  Oh yeah, no trade paperbacks either.

Now, I know what you're thinking (or might be thinking.)  You think this is either really cool and exclusive, or not worth all of the effort.  There is certainly a debate to be had, but Bad Idea is promising top notch creators like Kindt, Jeff Lemire, Joshus Dysart, Eric Heisserer and more.  If you want something bad enough, you'll find a way to get it.

Details of ENIAC were first reported by A.V. Club.  The first issue will be released on May 6, 2020.  Before we move on, let's take a look at a page of interior art:

All of this comes from the minds of Co-CEO & Co-Chief Creative Officer Dinesh Shamdasani, Co-CEO & Co-Chief Creative Officer Warren Simons, Publisher Hunter Gorinson, Director of Marketing Joshua Johns, and Sales Consultant Atom Freeman. I will talk more about Bad Idea on Episode 303 of the podcast this week.  More details, including a list of retailers where Bad Idea books will be available, will be provided once they are release.